With all that is going on in our world and in our nation at the beginning of a new year, we need to have
our perspective directed in the right place. Psalm 62, written by David, provides words of focus for us as we
tread into the unknown turmoil of 2021. Here are a few verses from this beautiful portion of Scripture.

“My soul, wait in silence for God only, For my hope is from Him. He only is my rock and my salvation, My stronghold; I shall not be shaken. On God my salvation and my glory [rest;] The rock of my strength, my refuge is in God. Trust in Him at all times, O people; Pour out your heart before Him; God is a refuge for us (vvs.5-8 NASB). 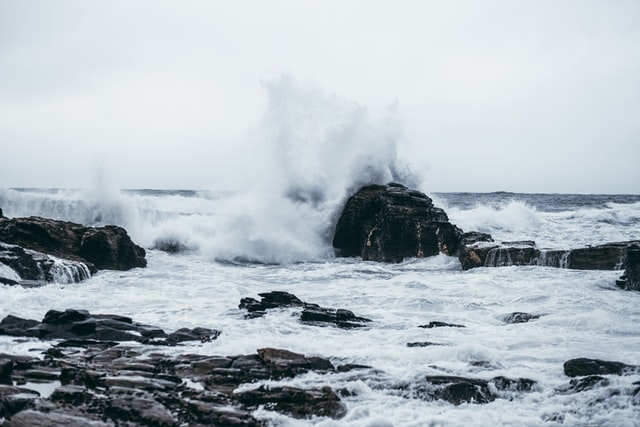 When I was a teenager, I used to go to Riis Park Beach in Queens, New York. We would go as a youth
group during the Summer and enjoy the waves of the Atlantic Ocean. One of the particular features of that beach
were its “bays”. They were sections of the beach that were delineated by rock jetties extending from the fine
sandy beach into the turbulent ocean. The jetties were there to influence the current and riptides so that it was
safer to bathe. These jetties were “off limits” to bathers, but as typical teens, we wanted to explore them. So, we
would gingerly jump from rock to rock and go out to the end of the jetty. Fortunately, none of us ever got into
trouble or fell into the water. Now, as I look back, the experience of standing on those rocks reminds me of the
words and truths in Psalm 62.

I recall jumping from rock to rock, until I found one which was flat enough to confidently stand on. I could experience the big waves crashing onto the rock, with the splashing salt water drenching me amidst the loud sounds of the ferocious ocean surrounding me. In spite of the dangerous situation I was in, my feet felt no movement under me, whatsoever. My senses told me that there was formidable power surrounding me. I could hear the waves crashing, I could feel the water splashing and the wind blowing, I could taste the salt water in my mouth and the burning sensation in my eyes. But, I had no trouble keeping my balance because the rock was not moving. The rock was so big and so heavy, that it could not move. It was as if the surrounding torrent was no threat to me at all. I was safe. So when I read Psalm 62, I identified almost immediately with the rock jetties that I used to recklessly explore. In the midst of danger, the rock was a safe place.

As I hear of the increasing cases of COVID-19 and accompanying deaths, as I reflect on the incomprehensible events at the U. S. Capitol, as I recall the all too frequent reports of racial violence, of civil disobedience accompanying peaceful protest, of worldwide reports of religious persecution, of economic devastation to many businesses, of divisiveness in churches over face coverings and in-person meetings, of reports about prominent Christian leaders participating in some of the most heinous sins, and the list goes on, I am at rest when I stand on the Rock of my salvation. That is only possible through faith. That is only through an intimate experiential knowledge of the Creator God.

When we experientially know Him through our relationship with His Son, Jesus Christ, we will by faith, rest
secure on the jetty that is extended out into the tumultuous ocean of a sin corrupted world. My prayer is that you
will read Psalm 62 and draw hope from the Rock, Who alone is God our Savior.